Assembling a Rail System From Your AR-15 Handguards

Home Assembling a Rail System From Your AR-15 Handguards 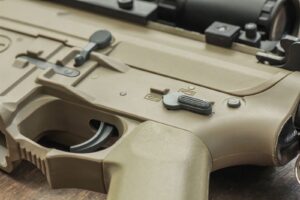 When it comes to rails, you have two choices: free-float and non-free-float (also known as drop-in). Due to barrel harmonic components, free-float rails do not contact the barrel, improving the rifle’s precision. As a result, mounting systems for free-float rails are usually safer and more robust, but they often necessitate the use of tools to build.

Drop-in solutions are much easier to install and usually don’t require any tools. Drop-in rails, such as Firefield’s Edge Carbine Two-Piece Rail, are a perfect choice for those looking for a simple non-free-float modification that allows them to install accessories reliably.

Rail variants come in three varieties: Picatinny (also known as MIL-STD-1913 Rail), Keymod, and M-LOK. Interface systems are used in all three styles to mount sights, lenses, and accessories. Picatinny rails are the latest of the three designs. The Picatinny rail was invented in the 1980s by firms attempting to standardize the Weaver model. In the 1990s, Picatinny Arsenal in New Jersey finished and streamlined the pattern. The upper receivers on M16 rifles and M4 carbines were among the first to have a Picatinny rail, making it simpler to mount optics. The Picatinny rail was eventually introduced into handguard Designs By Enterprising Gunsmiths.

Furthermore, the Picatinny rail concept is older and heavier than the other options listed, but it is still very valid in rail interface solutions. They are now in use by the US military and law enforcement authorities around the country. Most rail designers continue to offer quad rail alternatives. After Picatinny had been the industry standard for a few decades, Keymod entered the market.

Because of their compact skeletonized construction, keymod rails gained tremendous popularity. They are also significantly thinner than Picatinny rails. People who already own Picatinny devices will save money by using Picatinny rail parts and Keymod adapters instead of buying new ones.

The Keymod design, which is freely available to the public, is well-known and industry-standard. M-LOK, which stands for “Modular Lock,” is Magpul Industries’ most recent mounting mechanism. M-LOK, unlike Keymod, is not an open-source project. With permission from Magpul, any producer may receive free licensing. M-LOK appears to be the most famous right now, with Keymod close behind. 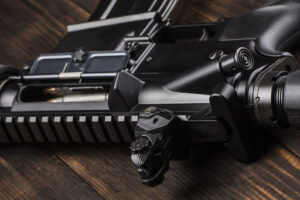 Your ‘mounting’ process determines the challenge of installing a new rail. Drop-ins are usually very simple to use. In most cases, non-specialists will mount drop-in rails using only simple hand tools or nothing at all. The delta ring (or slip ring on “retro” rifles) must be pulled back to allow enough slack for the stock handguards to come loose. The new Rail should be installed in the same manner as the existing one was replaced. The forward section of the Rail should fit under the endcap to the rear of the forward sight/gas block. Pull the delta ring back and join the Rail’s two halves.

Installing free float rails may be more complex and can necessitate the use of equipment. This procedure usually necessitates the replacement of the barrel nut and, in some cases, the barrel itself. We recommend that you have a licensed gunsmith supervise or mount your firearm. Second, get rid of the old furniture. The handguard end cap, gas block, muzzle device, and front sight base will also need to be removed before installation.

Remove the barrel nut with a barrel nut wrench or AR armorer’s wrench after you’ve removed the furniture and the essential small pieces. The delta ring mechanism can be replaced once the barrel nut has been removed. If the barrel has to be repaired or replaced, or patched, now is the time. The new barrel nut that came with the Rail could now be assembled and torqued to the manufacturer’s specifications.

If the Rail is not configured to operate with an A2-style FSB, a low-profile gas block and tandem components should be purchased and assembled. Place aside or eliminate the handguard end cap. Replace the gas system, then slide the Rail over the barrel and tighten the barrel nut. The final attachment approach varies depending on the Rail.

Most rails lock onto the barrel nut, while others are attached with screws. For this procedure, follow the manufacturer’s directions. Attach the Rail to the barrel nut and torque it correctly. Then, to finish the installation, reinstall the muzzle device. A licensed gunsmith can now inspect the weapon for proper mounting.

Rails are an excellent choice for those looking to “modernize” their rifles. They make it simple to install essential accessories such as lights, lasers, and grips. Remember that, depending on the shooter’s grip and shooting posture, having more real estate on a rail will also help with stabilization. Finally, keep in mind that enhancements and improvements do not make an individual a better shooter; instead, training does. Once you’ve installed the Rail, go to the range and start practicing!

You could get amazing scopes and binoculars deals at Adventure Survivalist. Hunting gear including knives, camo, gun cleaners, and equipment are in plenty in our moka Farms Port Orange, Florida US shop. We also have amazing metal Art collections. Get in touch with us today at Phone: (386) 853-0085 oe Email: adventuresurvivalist@live.com.